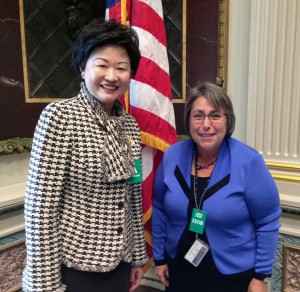 “Martha J. Kanter was nominated by President Barack Obama on April 29, 2009, to be the under secretary of education and was confirmed by the Senate on June 19, 2009. Kanter reports to Secretary of Education Arne Duncan and oversees policies, programs and activities related to postsecondary education, adult and career-technical education, federal student aid, and six White House Initiatives-Asian Americans and Pacific Islanders, Educational Excellence for Hispanics, Educational Excellence for African Americans, Historically Black Colleges and Universities, Tribal Colleges and Universities, and Faith-Based and Neighborhood Partnerships. To spur education, economic growth and social prosperity, Kanter is charged with planning and policy responsibilities to implement President Obama’s goal for the U.S. to have “the best educated, most competitive workforce in the world by 2020″ as measured by the proportion of college graduates over the next decade. Under Secretary Kanter and her team are keenly focused on improving college access, affordability, quality and completion to implement President Obama’s American Graduation Initiative.”